The latest research released by Counterpoint shows that in the second quarter of 2022, global mobile phone revenue fell by 2% year-on-year and 15% month-on-month to $95.8 billion. Global handset operating profit rose 6% year on year to $13.1 billion, with the top five handset makers contributing around 80% of total revenue.

The report pointed out that the average price (ASP) rose 6% over the same period, so there was also a 6% year-on-year operating profit growth rate. Oppo, Vivo, and Xiaomi all saw double-digit year-over-year revenue declines, while Samsung and Apple’s revenue rose 25% and 3%, respectively.

Commenting on the overall market dynamics, senior analyst Harmeet Singh Walia said: “Global handset revenue declined amid continued pressure from declining shipments. But with global brands such as Samsung and Apple leading overall ASP growth, and even some Chinese brands, groups such as Xiaomi, Lenovo, Honor, Huawei, and Transsion have all struggled to move to higher ASP devices over the past year, and overall operating profit in the second quarter of this year has seen a year-over-year increase. 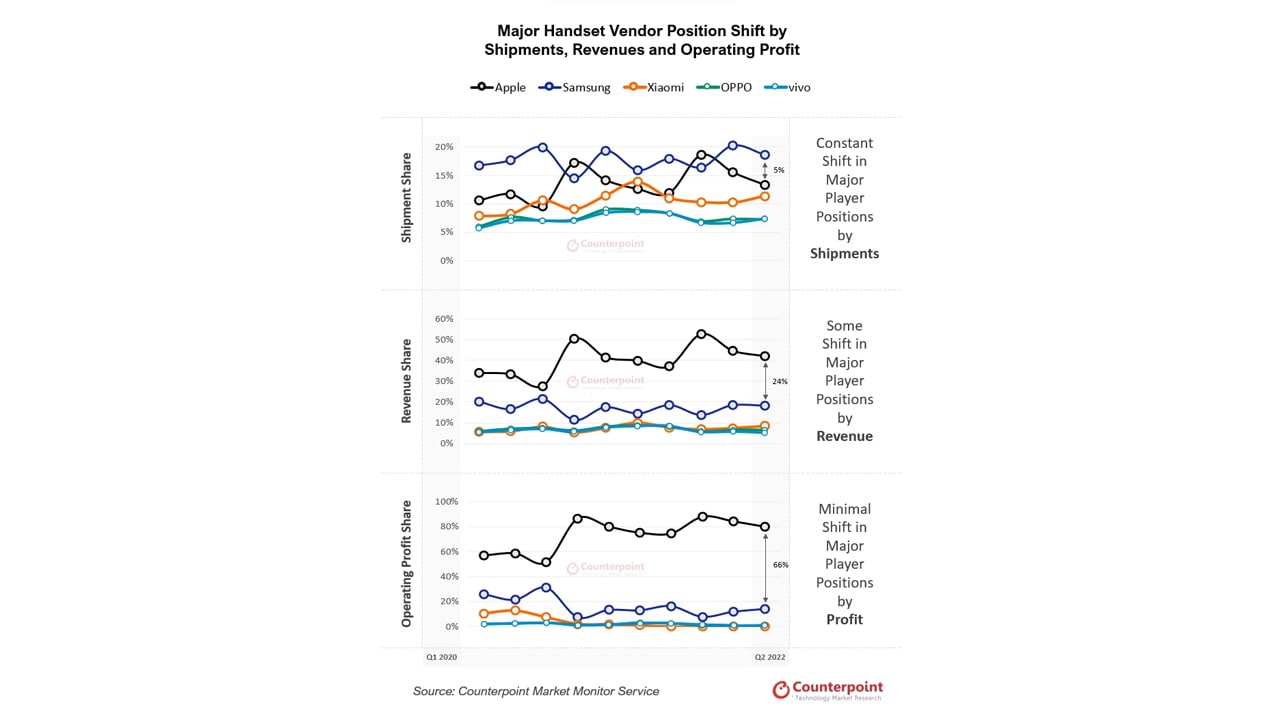 However, it is important to take this growth to put this in context. While the upward shift in the pricing band of phone makers has allowed some of them (except Xiaomi) to improve their margins, annual growth has been largely driven by the impact of the Covid-19 pandemic rather than the entire quarter operating profit that continued to grow in 2021. Compared to the previous quarter, operating profit declined by 29%, compared to a 26% quarter-on-quarter decline in the first quarter of 2021.”

According to the forecast of Counterpoint Research, Apple released the iPhone 14 series earlier this month, and the demand is strong. It is expected that the ASP will hit a new high in the September quarter, reaching $892 to $944.

The increase in ASP was mainly due to the best-selling iPhone 14 Pro and Pro Max models. Evercore ISI surveyed about 4,000 consumers and found that about 56% of consumers who are interested in buying an iPhone are going to choose the Pro, compared with only 41% last year. Evercore ISI predicts that Apple’s iPhone ASP may rise to $940 next year, 10% higher than the iPhone 13’s cycle.