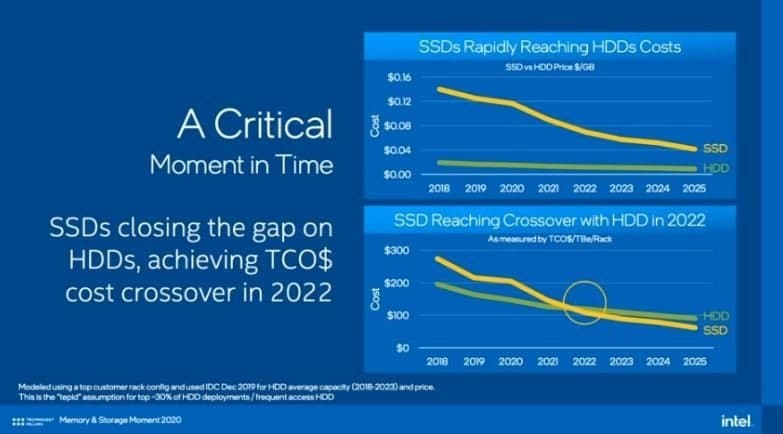 Intel announced several new SSDs at the 2020 Intel Memory Storage Day event held today, including 670p and Optane H20 hybrid solid-state drives. In addition, Intel also stated that it is developing a 5-bit PLC SSD, which will replace HDD in most use cases.

As shown in the figure above, with the development of SSD technology, the cost of solid-state drives is approaching HDD. Intel is beginning to sell its NAND business to SK Hynix. During the transaction, Intel still plans to operate its SSD business. All existing products and support will be transferred to SK Hynix after the transaction is completed.

At present, Intel’s storage department is doing business as usual, and Intel said it is developing PLC flash memory. Although the company is clearly optimistic about the prospects of PLC, it did not provide details on when the new flash memory will be available.

According to sources from Intel, Intel will retain Intel’s Optane business and plans to invest the funds obtained in this transaction into key businesses with long-term growth potential. SK Hynix and Intel will strive to obtain the necessary government agency permits by the end of 2021.

After obtaining the relevant license, SK Hynix will purchase the NAND SSD business (including NAND SSD-related intellectual property rights and employees) and the Dalian plant from Intel by paying a consideration of USD 7 billion for the first phase.

After that, it is expected that at the time of final delivery in March 2025, SK Hynix will pay the balance of US$2 billion to acquire other related assets from Intel.