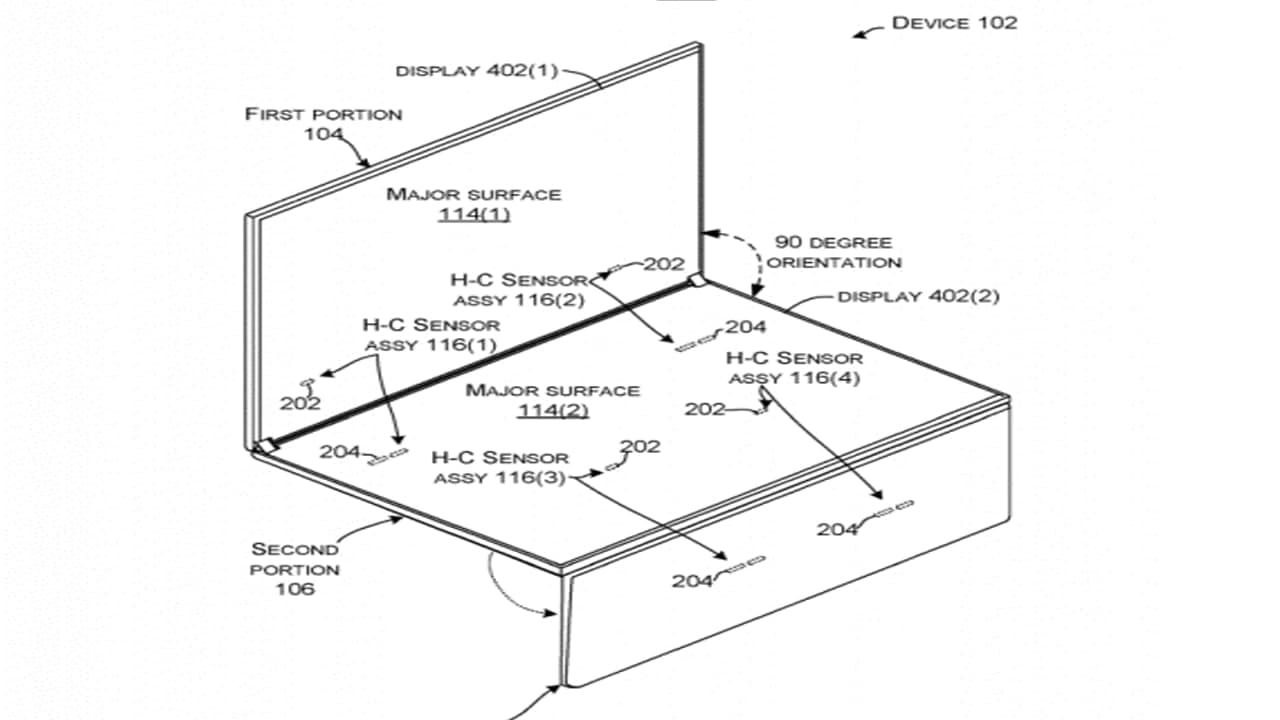 According to the latest report, Microsoft will continue to develop dual-screen smartphones in 2021 and next year, but the company seems to hope to attract users with three-screen phones in the near future.

Moreover, a patent filed on June 23, 2020, was published last week and was recently discovered by Patently Apple, showing the concept of Surface Duo. If it had a second hinge to accommodate the third screen, what would it be?

The patent itself details the hinge degree, parallel axis, elongated magnet, magnetic shield, Hall effect sensor, etc., and attached pictures. From the appearance, Microsoft hopes to add a 2/3 size display screen, which can be used as a Multi-function screen use.

Some people mentioned that the screen acts as a keyboard, trackpad, or game controller in different use cases. However, its most useful function maybe just an outward-facing screen, similar to the new hot spot of the Samsung Galaxy Fold.

Moreover, Microsoft’s Surface Duo phone naturally competes with Samsung’s Galaxy Fold phone, which does provide an external display for easier and instant access to content, while the lack of an external display on Duo’s phone triggered some viewing notifications.

This new patent, if executed properly, can help Surface Duo keep pace with mobile phones such as Samsung Galaxy Fold, and it can even be said to be a leap forward.

Since the three screens fold into each other and the top screen acts as a more traditional single display, those who occasionally or often want a larger tablet-style screen will have the greatest flexibility of any foldable product on the market today.

Microsoft’s patent has been visualized by the props team of the HBO show “Western World”, except for the aspect ratio, Microsoft’s version will be very similar to it.

Although exciting, there are still some issues to consider, such as the battery, weight, cooling, memory management, how the Microsoft launcher or general Android system will present a three-screen experience, and so on.

However, from the perspective of its interpretation, the new patent will help Microsoft overcome some of the shortcomings of Surface Duo and Surface Duo 2 it believes.

Furthermore, Microsoft expressed support for its choice of dual-screen folding plus single-screen approach to better mimic the dual-display experience of many people’s personal computing settings at work or at home. The question now is how many people will use the three-screen setting to create a better experience in the mobile field.