The Qingyun L410 notebook equipped with Kirin 990 has been shipped, and some enterprise users have already used this notebook. According to feedback from users, Huawei’s official website has already launched some information about the Qingyun W510 desktop computer and revealed some of its configurations.

According to data from Huawei’s official website, the Huawei Qingyun W510 desktop will be equipped with a self-developed 24-core 920 processor with a maximum clock speed of 2.60GHz.

There are two configurations for the graphics card, one is AMD 1GB alone, the other is also for Huawei’s self-developed HiSilicon 1GB independent display, and in terms of memory, it provides a storage combination of up to 8GB*2+512GB.

HiSilicon’s official website said that the chip is currently the industry’s highest-performance ARM-based processor, manufactured using a 7nm process, based on the ARM architecture authorization, and independently designed by Huawei.

In terms of system, the Huawei Qingyun W510 desktop computer will use the same UOS V20 system as the Qingyun L410 notebook. The system is independently developed based on the Linux kernel and is divided into a unified desktop operating system and a unified server operating system, including China Electronics Group (CEC), Wuhan Shenzhidu Technology Co., Ltd., ZTE New Fulcrum, and many other domestic operating system core enterprises, the current state is sufficient to meet the daily office needs. 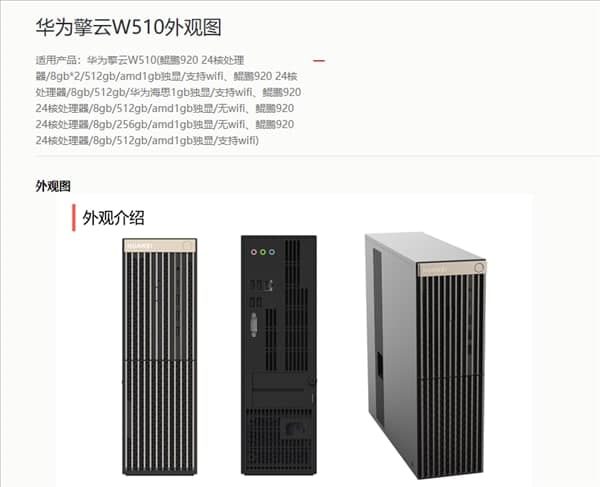 According to the information published on the official website of Huawei Qingyun, there are currently nearly 500 domestic software and hardware adapted to the Huawei Qingyun ecosystem, including various software products such as reading the translation, messaging, office software, audio, and video software, games, and printers. Hardware products such as scanners, handwriting boards, etc., basically cover all categories used in daily office entertainment.