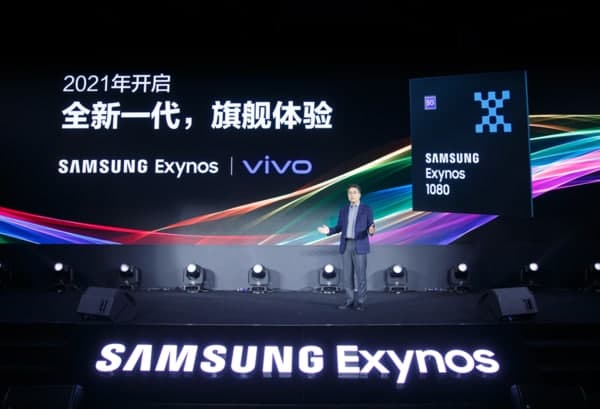 Samsung revealed its first 5nm based flagship processor, Exynos 1080. After its launch, it was said that Vivo will be the first phone maker to use this chipset. And now according to the latest news, the Chinese phone maker has officially confirmed that its upcoming flagship smartphone Vivo X60 series will equip this latest chipset from Samsung.

Compared with the previous 7nm process, the 5nm process of Exynos 1080 increases the number density of transistors by more than 80%, which can achieve stronger performance and lower power consumption. Vivo X60 series will debut Exynos 1080 chip with strong 5nm process performance.

Exynos 1080 also integrates 5G NSA/SA dual-mode modems, supports 5G NR Sub-6, millimeter-wave, and other frequency bands, supports download speeds of up to 5.1Gbps, and can achieve a greater degree of global network coverage. Exynos 1080 is the second mobile processor chip that Vivo and Samsung have cooperated with after becoming partners after Exynos 980.

Canalys analyst Jia Mo believes: “Samsung has been deeply involved in the field of mobile phone chips for many years, and smartphones equipped with Exynos series chips now account for about 15% of the global mobile market. Its latest flagship chip, Exynos 1080, has another performance Great progress. It is believed that the Vivo X60 series equipped with Exynos 1080 processor will bring consumers a more outstanding 5G application experience.