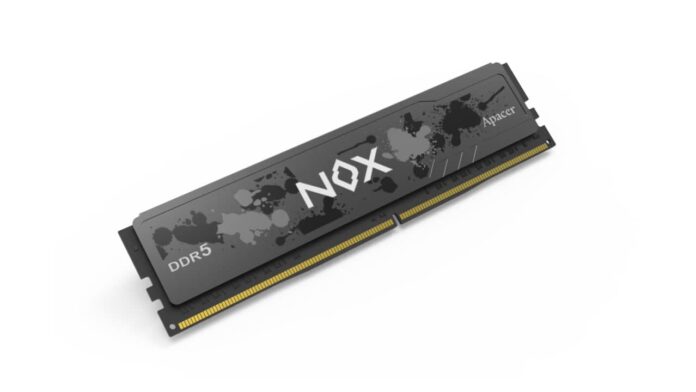 According to the official, this memory module design brings out the NOX with the image of splashing ink. In addition to supporting Intel XMP3.0 one-key overclocking technology, it is also equipped with a power management chip to enhance the heat dissipation design.

In addition to gaming memory sticks, Apacer also launched a DDR5 general stick that complies with the JEDEC standard with a frequency of 4800MHz, which is a 50% increase in bandwidth compared to the DDR4 standard frequency upper limit of 3200MHz.

Moreover, the standard operating voltage of DDR5 has been reduced from 1.2V to 1.1V, and the power saving efficiency has increased by 8%. The number of banks for DDR5 is twice that of DDR4, and the capacity of a single bank can start from 8GB.

According to the JEDEC specification, it can support a single bank up to 128GB. DDR5 also has an error correction function that supports On-die ECC, which can automatically calculate and correct data errors in the memory without correction by the CPU, which can improve system stability and data accuracy.

Besides, the Apacer consumer and gaming high-speed DDR5 memory series will be launched in the near future.

How to enable 4K images uploads on Twitter for iOS and...

BOE aims to raise OLED panel deliveries by nearly 70% this...