The first developer preview version of Android 12 may be released in the near future. At the same time, a batch of leaked screenshots shows that Android 12 will be greatly improved in system security.

According to the leaked screenshots, Android 12 has added a privacy indicator function. When the application utilizes the camera or microphone, the user may get a warning in the status bar indicator.

Clicking on the indicator icon on the status bar will pop up a pop-up window at the top of the screen, telling the user that applications are using the camera or microphone. 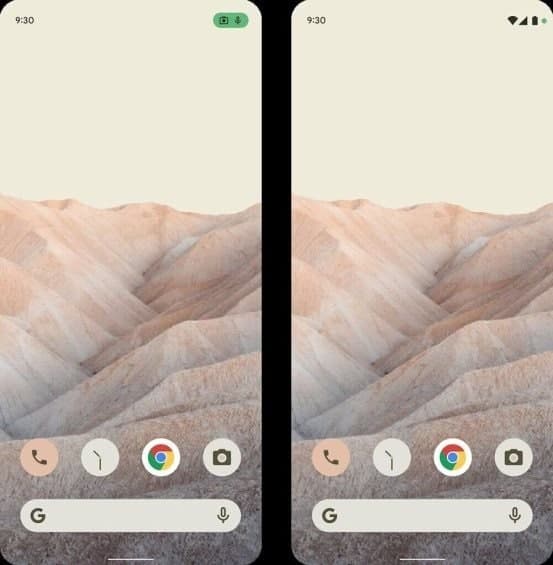 Leaked development documents show that these indicators must be displayed at the top of the screen in bright colors, and in any case, as long as the camera or microphone is accessed, they will be displayed.

Google has been testing privacy protection features two years ago and will release this feature on Android 12. Along with this, the ‘privacy’ setting in the Android system will also be improved in Android 12.

The new privacy settings may include disabling the camera, turning off the location function, and completely muting the microphone. The user can use the ‘Sensor Off’ function to disable all sensors on the user’s device, but this function is only available for systems with the ‘Developer Options’ enabled.

Additionally, the ‘sensor shutdown’ function can be deployed in the drop-down menu bar, allowing users to turn off various sensors on the phone more quickly. Google will also build anti-tracking features in Android 12.

Although this feature was not disclosed in this leak, Google has clearly stated its intention to develop a ‘less strict’ application tracking transparency feature.

Compared with Apple’s strict privacy protection system and anti-tracking features, Google seeks an ecological environment that can balance user privacy and the interests of advertisers.

Therefore, the anti-tracking function of Android 12 will not be very strict. It is possible that developers can track part of the user’s data even without the user’s permission.

Google’s approach to Android 12 may be similar to Chrome’s security plan. Google previously announced that it will phase out third-party cookies in Chrome within two years.

Instead, the Chrome browser will use an alternative method that allows some less specific data-collection behaviors. For example, advertisers will be able to target people with similar interests, but not individuals.

Netflix announced, the release of ‘Dota2’ series of animations on March...

Amazon will invest USD 1 billion funds to support innovation in...